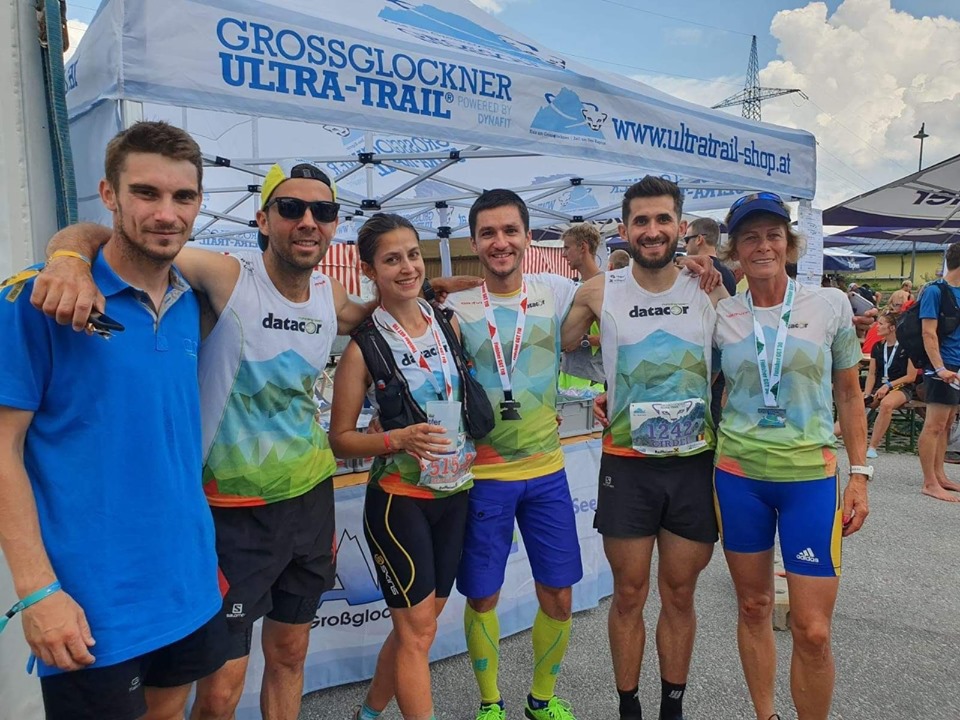 When the idea of running in Grossglockner Ultra Trail came up, we thought it would be a great opportunity to discover some new trails, enjoy some famous sights, but while also being competitive at such an international level.

Things sounded even better when we heard there was a relay race – one of us would do the first 60k, and the second, the following 50k of the entire original route around the Grossglockner peak. It was obvious who would do what 🙂 For Andrei, a 60k is barely a warm-up.

So we signed up and got ready for the Austrian adventure. We decided it would be out A race of 2019 – the one where we’d try to be in our peak shape, hoping for a good result.

But what followed was beyond my imagination: we managed to win the race. In mixed teams, we were the first team, and actually just one minute behind the first male team.

There were a lot of question marks about this event, though. We didn’t know the rote, neither of us had ever been around there, we didn’t know how much snow there will be left at altitude on race day and, to make it even more interesting, two weeks before the competition I got an ankle sprain. So I wasn’t even sure I would be able to run at all. Actually, on the first 10 days after the sprain I didn’t run at all, and then I did some easy jogs.

But on race day I tied my ankle with tape and prayed for the best.

We arrived in Austria with almost the entire Datacor Running Team. Between all of us, we’d check all the event’s races – there were some in the 30k, some in the 50k, in the 75k, and as for the longest distance, Andrei and I would do it as a relay.

Before the competition, we spent some days around Kaprun visiting, hiking, and some of us even cycling. There’s so much to do around there especially if you’re into hiking, running, or road cycling. But even if you’re not, you can take the cable car up to almost 3000m and enjoy the view. These mountains are quite accessible from an infrastructure point of view.

Let’s not forget the Grossglockner Alpine Road, that is definitely worth the drive for the beautiful views it offers. Unfortunately we only did part of it, because the weather was cloudy and we couldn’t see much.

On the last day before the start of the ultra race I did a short route recognition on the final kilometers of the 50k race. That was a brilliant idea, because on the race day, when I got to the familiar part of the route, I already knew how long I had left and what to expect. That’s not to say it was easier. On the contrary, the last 8k felt harder than the previous 41k 🙂

Andrei had his start on Friday at 10pm, at the same time with the 110k ultra runners. I joined him at the start line and then went back to the room to get ready for my own start, whenever that would be.

That’s the fun part about relays, especially in trail races – if you’re the second, it’s pretty difficult to estimate when the first runner will arrive.

I couldn’t sleep at all, was super nervous and kept refreshing the live trail app. It showed that Andrei was leading the race and that he would arrive at about 4am, which was better than any expectation and better than the race record 🙂 But that was the problem – to get to Kals, where the 50k race and the second relay start, I had to take a bus. And the buses were scheduled for 2.45 am or 4.30 am. I was this close to getting on the 2.45 bus, but talking to one of our team mates I realised that the live trail estimations were not very accurate.

It was 5.30 am, I was on the bus to Kals, the live trail app showed that Andrei would finish at 5.35 and the bus driver’s app showed we’d arrive at 5.46. I was actually considering to do my warm up in the bus and start running once I got off 🙂

But luckily, we had time, and after a few minutes of confusion, we managed to pass the relay. I remember that Andrei looked super pumped from all that fast running and a bit worried that he couldn’t see me in the tent. So i started running immediately to make up for the lost minutes.

The route was beautiful – we passed by blue water lakes, we climbed vertical paths that seemed never ending, and my favourite single trail roller coaster type of paths, on the las 10-12k. But for me, the entire race was a rollercoaster. I was trying to push, but also not too hard on downhills, being afraid for the ankle.

I had moments when all I though was “I have to move faster, Andrei suffered a lot to be the first”, and moments when I looked at the beautiful alpine valleys around and thought “this is amazing, I feel so lucky to be here”. You know, that kind of moments of gratitude that make time stop, and capture memories that last forever.

But as the kilometers passed, my legs felt heavier and heavier. Luckily, on the last few kilometers, I saw Andrei waiting for me and he joined me to the finish line. It was already noon, the weather was hot for my standards, and I every step I took was a battle with myself. The last part of the race is flat, exposed to the sun, and I felt like I was moving like a snail.

But finally we got to the finish line together, happy to hear that we were the first mixed team to arrive, and second team overall. It was just a reminder that sometimes, against all odds, things can go well.

There’s a lot of mental involved in a race, especially when it lasts for many hours.

It took me about a half an hour to be able to speak and tell our team mates how my race had been.

We spent the next days visiting the area some more, with a half a day stop in Hallstatt, where we couldn’t say no to the trails that surround the lake.

It’s definitely a race I recommend, and that both of us liked. Even if Andrei didn’t see much while running in the night 😛 But this only means we’ll be back outside the competition itself, to do some visiting and climb – on bikes or on legs.